In this article I’ll show you how to build your own plugin system for slate-js.

What I’ll be describing is a much loved abstraction by clients of mine and so I want to share it with you dear reader - in the hope that it’ll help keep your expanding editor codebase maintainable and composable.

Before we go into the nitty gritty let’s have a look at why you’d want a plugin architecture in the first place.

Why do we need plugins?

A lot of editor codebases look something like this: 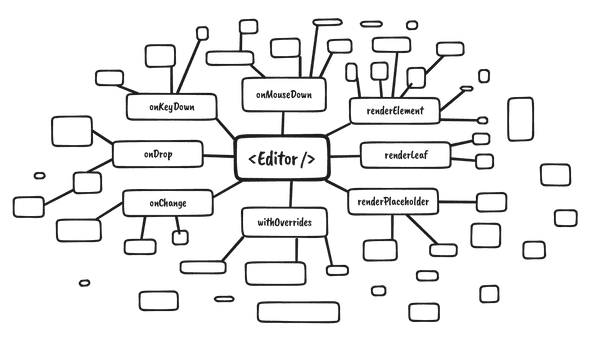 I call this a monolith. In a codebase like this - the modules mirror the interfaces that slate exposes. Every property of the interface (such as renderElement or renderLeaf, onKeyDown or onMouseDown) branches out into it’s own arbitrarily deep hierarchy of files and folders.

If you are a small team of 1 or 2 people who are experienced with slate-js, there’s really nothing wrong with this architecture.

… a monolithic codebase can be a cause of severe pain.

Frankly, the cognitive burden for developers will always be higher in text editors than in other parts of your front-end. They are unfortunately almost without exception - complex software.

That doesn’t mean that they have to be complicated codebases however.

Plugin systems have prevailed as a dominant architecture in text editors and IDEs for good reason. They soothe the pains described above, let’s have a look at how they do that.

Plugins are a better mental model

Consider this scenario: Your team is tasked with implementing styling functionality. In a monolith they would have to update all the modules that are needed to implement this kind of functionality. These modules are spread around the codebase and without good knowledge of slate-js they will be hard to find.

A plugin architecture enables and encourages your team to think in features and group your functionality as such. You might have a youtube plugin or a code plugin, or in our case - a textStyling plugin:

All code for one feature is now conveniently contained in one, composable unit, rather than being spread out. In my experience this different mental model can make for huge gains in productivity for teams - because of the reduced cognitive load. Your team can now focus on the feature they implement, rather than having to navigate and keep in mind the rest of the ever-expanding code base.

On the other hand, newcomers to the codebase can see all the pieces needed to implement a feature in one place. This makes it so much easier to comprehend and learn from.

Enough about why plugins are cool ➡️ let’s see how you can add the goodness of plugins to your own editor without breaking a leg, an arm and your brain in the process.

A plugin system needn’t be complicated. The starting point I recommend to clients of mine is actually surprsingly simple.

First - let’s assume this signature for our plugins:

As you can see - Plugin is a function that takes EditableProps and Editor as arguments, and returns EditableProps. That is sufficient for a lot of usecases.

And here’s the utility function that composes all of your plugins into a single EditableProps, which you can then spread on your <Editable/> component.

All composeEditableProps does is loop over each plugin and feed the output of the last plugin to the next one.

Here are some simple example plugins to show it in use:

And that’s it. Above you can see two plugins, the header plugin and the defaultProps plugin and how they’re composed into EditableProps.

What if I want my plugins to contain more than just editableProps?

Let’s say you have UI that is rendered outside the <Editable /> component (such as toolbar buttons to format your text) which you’d like to include in your plugin. This is all possible, all you need to do is configure your type. For example, the plugin type could instead look like this:

We’ve now replaced the first argument and the return value of the Plugin type with PluginProps - which contains editableProps but contains also an renderToolbar prop, for rendering a toolbar.

The limits are your imagination when it comes to what functionality you can compose. It doesn’t have to be just slate specific.

Why can’t I just use an existing plugin system?

Of course you can. There are great plugin libraries such as Plate that might work quite well for you. However their plugin system comes with strong opinions. Opinions that often collide with those of myself or my clients. So far - most projects I have worked on have opted to keep their editing functionality and also their plugin systems inside their own codebase.

That’s a wrap. If you’re keen on implementing a plugin system for your editor but need help, feel free to reach out on twitter or via email, I’d love to hear from you.