Asynchronous content in slate js is particularly tricky, let me explain why that is before we dive in.

For uploading media, the UX that users of rich text editors are used to goes like this: 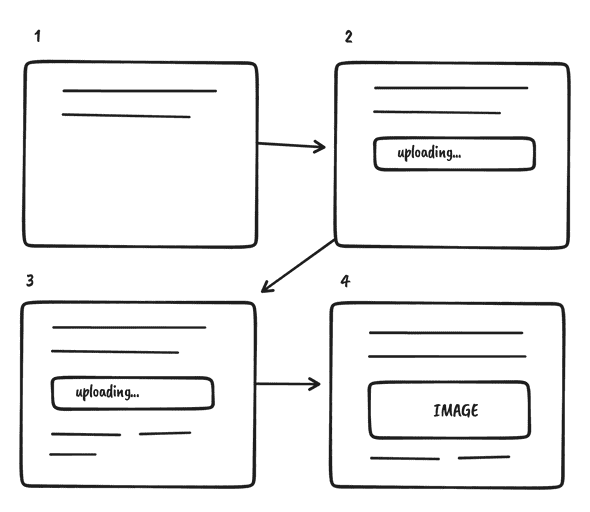 A naive implementation would look something like this (pseudo code):

The order of these operations matter, since every undo will apply the opposite of each operation in reverse order. Therefore the above flow when undone will behave something like this: 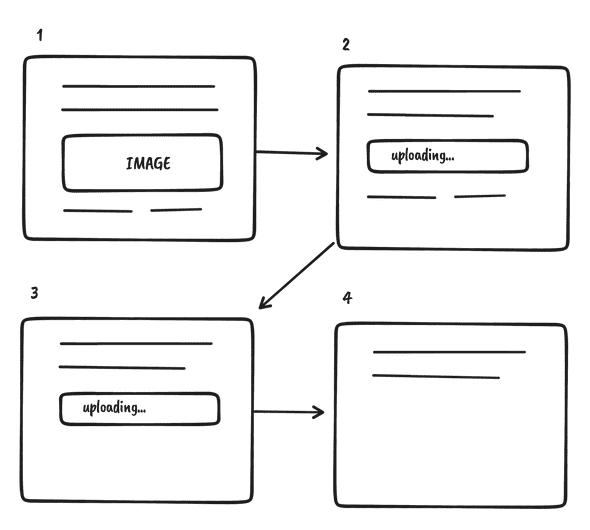 As you can see - this results in a broken user experience. The loading spinner should never re-appear since the image has already been uploaded.

In short - slate’s change management isn’t designed for asynchronous interactions and therefore needs to be extended for our use-case.

Fortunately, there is a simple abstraction we can use to solve this.

Entities to the rescue - A missing feature in slate

I call this abstraction - EntityState - the same name that draft.js uses for a similar abstraction. This use-case is one of the things that the draft.js architecture anticipated. It’s built into draft.js’s EditorState but is unfortunately missing in slate. That isn’t such a huge issue though - because slate.js lends itself to be extended.

So what is entity state exactly?

With a separate state for asynchronous data, we completely circumvent the problem described at the beginning.

Instead of the two slate operations:

We now have only one slate operation: 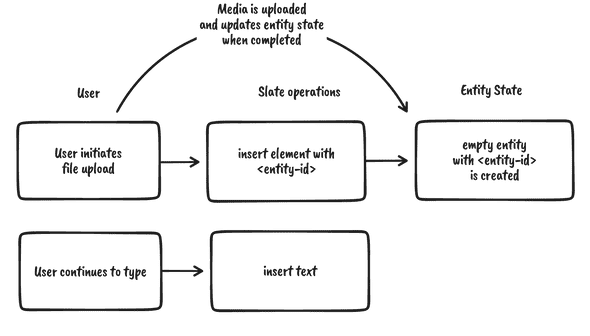 Because the state of the entity is separate from that of the editor, any changes to it will be unaffected by undo or redo.

So that’s it in theory. If you’re anything like me however - you’ll find this easier to understand when putting it in practice:

Building an Editor with EntityState

Let’s start out with a simple skelleton to render a slate editor. You can use my slate-js-boilerplate as a starting point if you like.

In order to add elements that can have ids you’ll need to extend your slate typescript declaration. Here’s how mine looks like for this example

That’s all there is to creating the entity state. I’m only using an optional url attribute for my Entity type. If the url attribute is undefined we know that the upload is still ongoing.

The upsertEntity method will let us add and update entities.

You might have noticed that the store isn’t empty but contains an example image of a kitten. Let’s render this image in our editor before we move onto uploading things. I’ll update our editor state to include a reference to the entity:

As you can see I’ve added an element below our “Hey there” paragraph, the id of that element refers to the item in our entity state. Let’s use this to render the element:

renderElement is a prop on the Editable component which allows us to configure how slate renders it’s “elements”. This is the prop we need to render our image of a kitten.

Note that we’re using our store to get the entity that our element refers to and if the store has our entity, we render it, otherwise we render the slate DefaultElement.

Don’t forget to spread props.attributes on the element you’re rendering as well as contentEditable={false}. This is needed to tell the browser that the content is in fact not editable - which is true for images. {props.children} is also needed so that slate renders without errors.

Additionally we need to tell slate that we’re rendering a void element, which is jargon for non-text elements such as images. To do that we override the isVoid editor method:

In this code snippet we’re telling slate that every element that has an defined id attribute is also void.

Now you should see the kitten rendered in the editor: 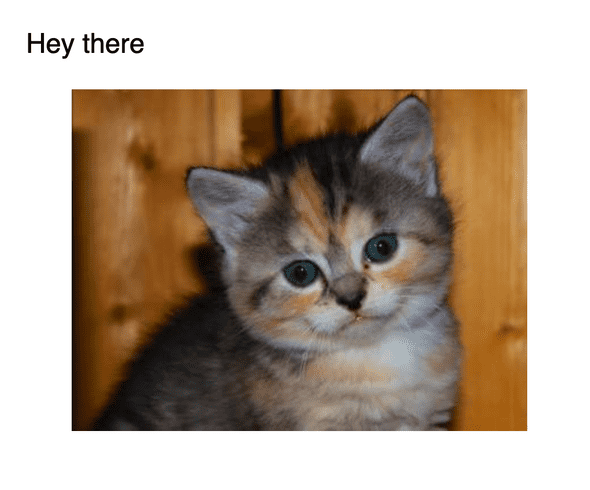 I’m going to use filestack because they have a free tier and I can’t be bothered to deal with the verbosity of the google apis.

First install and import the filestack module and initialize it with your api key (I had to sign up to get that).

Then you define an event handler for file drops, namely the onDrop prop on the Editable component:

What we’re doing here is:

This’ll work as expected but one thing is missing - our loading state. To render a loading state we’ll make a small update to our renderElement prop:

All we really need is to check if the url is defined or not.

To keep things simple I’m just rendering the word “Uploading…” but your designer probably has a better idea. Also - don’t forget to add an alt tag for accessibility.

Ideally - you’d make that editable too but that’s for another tutorial.

That’s a wrap, to see the entirety of this example, head over to my slate patterns repository on github.

Things to keep in mind when implementing entity state